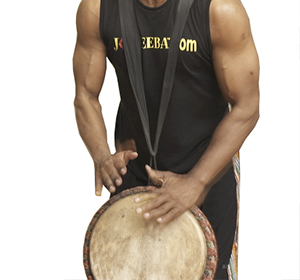 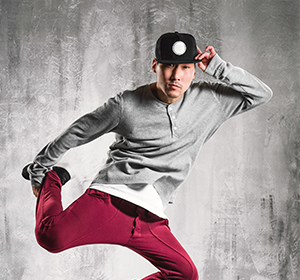 Djoniba Mouflet is an internationally-acclaimed drummer, dancer, teacher, performer and choreographer as well as a musical producer, writer and composer. Born in Martinique, he spent many of his teenage years in Senegal, Mali, and Guinea, West Africa, where he studied with renowned dance and musical masters Boully Sankho, Doudou Ndiaye Rose, Kemoko Sano and many more.

Djoniba mastered the dance of various regions of Africa as he studied with the different cultures in small villages as well as in local companies, including Ballet Forêt Sacré, Ballet Mëissa, Ballet Conakry and the National Ballet Africain of Guinea.

Djoniba mastered the dance of various regions of Africa as he studied with the different cultures in small villages as well as in local companies, including Ballet Forêt Sacré, Ballet Mëissa, Ballet Conakry and the National Ballet Africain of Guinea.

While working in Paris during the summer to finance his studies in Senegal, Djoniba was scouted and granted a three-year scholarship by Arthur Mitchell, founder of the Dance Theatre of Harlem, to study at the prestigious institution in New York City. There, he extended his skills in ballet, tap, modern dance, musical theater, and jazz. Within a few months, Djoniba was not only a student, but was also offered the position of African Dance teacher at Dance Theater of Harlem.

Yet, life in New York City was not easy, and Djoniba slept on the subway and survived off of bread and butter. However, that did not stop Djoniba’s determination. His physical abilities and incredible natural talent, dance skills and musical versatilities earned him many roles and led him to work with Spike Lee, Chaka Khan , drummer Will Calhoun from Living Colour, Kid Creole and the Coconuts, actress Lindsay Wagner, and Babatunde Olatundji among many others.

Developing the concept, Djoniba spent one year searching for a location for his new creation. Finally, in March 1993, Djoniba finally found a space, signed a lease, and began his new journey on the road to becoming the first Black man to open a cultural center in Manhattan, New York City dedicated to the promotion and advancement of African and Pan-African dance, music, and culture. On April 1st, 1994, Djoniba Mouflet opened Djoniba Dance & Drum Centre at 37 East 18th Street, by Union Square.
Without the money or formal experience, Djoniba accomplished what seemed unlikely by opening the first school dedicated to showcasing the beauty of Black people, from Africa and the African diaspora, through dance, music, and culture. Djoniba’s goal to create an institution that brought together people from different ages, races, communities, economic levels and cultures was an instant success. Due to the economic crisis, the school closed its doors in 2008 and partnered with Peridance Capezio Center in 2010 in Union Square, Manhattan, and in Fall 2018 formalized a partnership with Rioult Dance Center in Queens.

He is the founder and choreographer of Ballet D’Afrique Djoniba, a company of dancers and musicians performing traditional West African dance and music. Their extensive international tours have included performances on some of the world’s most prestigious stages, including Walt Disney World, Bush Gardens, the Guggenheim Museum, the Museum of Natural History as well as stages of hundreds of public schools and universities in the USA.

Over the years, thousands of students have passed through Djoniba’s high-energy classes. His unique “Joneeba” teaching style and technique has become a model for many. Djoniba is tireless in his work as a humanitarian and cultural ambassador. These endeavors include programs for homeless children and a children’s scholarship program which has helped hundreds of children citywide from low-income families to attend dance and drum classes for free.